So, rate of force development (RFD)... what is it, why is it on my shit list, and how can you use it?

So, rate of force development (RFD)... what is it, why is it on my shit list, and how can you use it?

Thankfully, unlike some biomechanics terminology, this is a pretty simple metric to define:

‘…It is the rate at which force is developed…’ 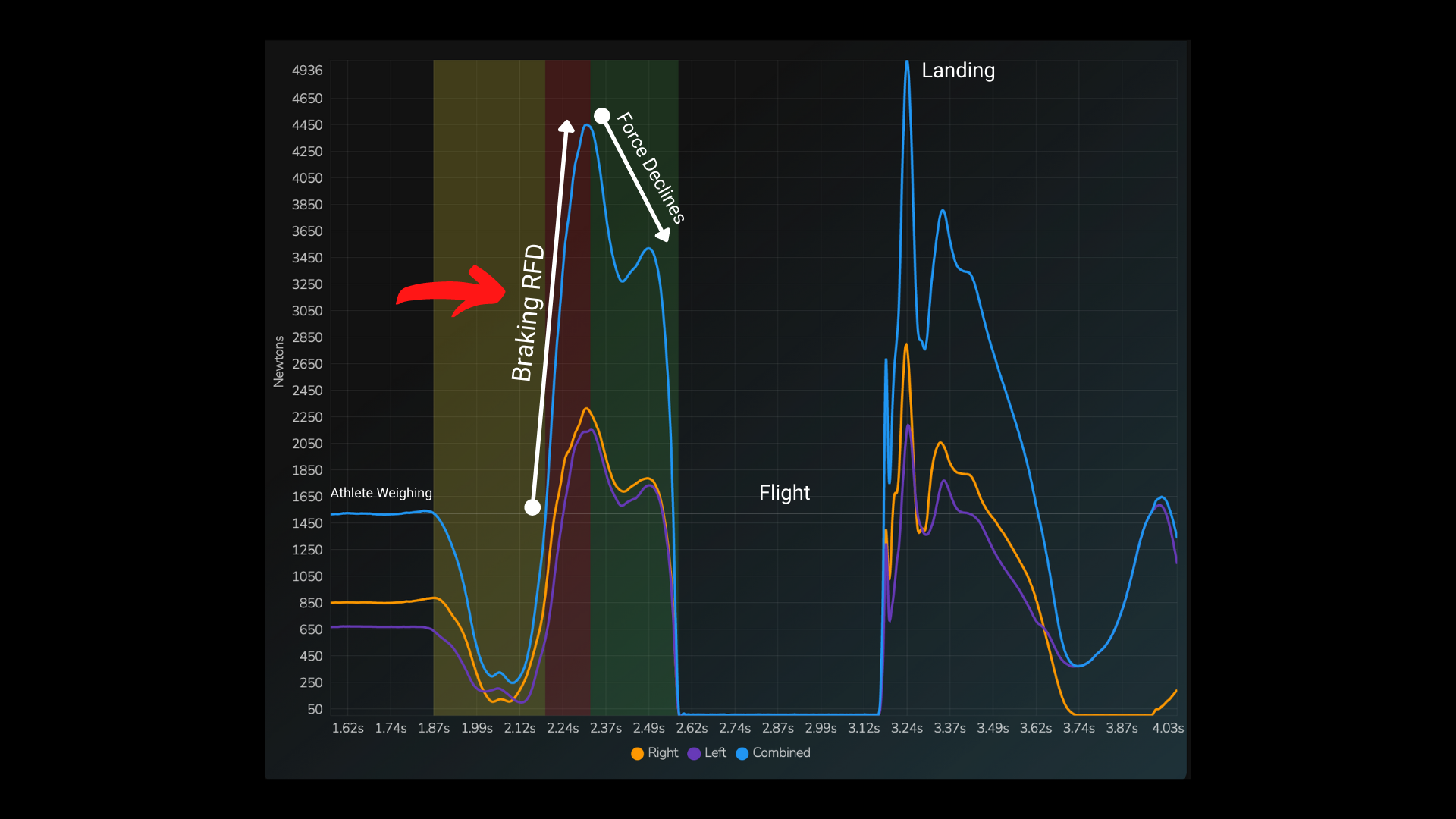 As such, it has and continues to be an incredibly attractive metric to the strength and conditioning community. I mean, most of you work with athletes who have to apply large forces quickly to perform their sports effectively. We also know that this is the sort of quantity that seems to leave us as we age. So far, so good, right?

Okay, not only is it conceptually very attractive, but it can also be pretty simple to calculate:

*It's important to note that force only "develops" during the braking phase. Force does not develop during the propulsive phase, as the starting point of force (force at minimum displacement) is greater than the endpoint of 0 Newtons when the athlete enters takeoff and the flight phase.

Why is it on my shit list then? I'm afraid that there are a few layers to this answer. First, it's because the conceptual attractiveness of this metric can sometimes render our ability to critically evaluate the methods we use to collect and process data useless. This can wreak havoc on our data. How so? Well, probably the easiest way to illustrate this is to take you through some worked examples using isometric mid-thigh pull (IMTP) and countermovement vertical jump (CMJ) force-time data. Although this will reveal the source of some of my frustrations, I'll also try to help you make sense out of it so that you can either use RFD, or alternatives to help inform your day to day practice.

Let's dig a bit more deeply into the calculation of RFD. Consider Figure 2, which shows a pretty typical IMTP force-time curve. One of the really nice things about this kind of task is that we can get a feel for how quickly the athlete was able to achieve their first force peak just by looking at the shape of the force-time curve. This should not be underestimated because it can provide both you and the athlete some really useful and immediate biofeedback. 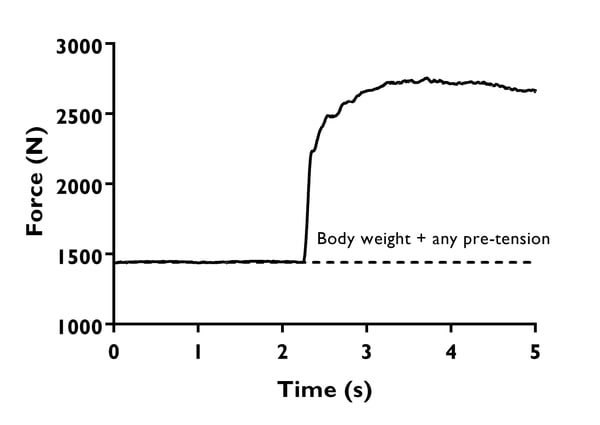 Taking things a stage further then, as long as we're able to robustly identify the pull start (see recent review by Comfort et al. and Chavda et al. for additional insights) and know what points we're interested in we can simply divide the change in force by the change in time. We might be interested in the rate force is developed during different parts of the IMTP, like the first 50, 100, or 200 ms. To do this, all we'd need to do is identify the force at the pull start, subtract that from the force at the first time point of interest, and then divide that by the time of interest:

This is illustrated in Figure 3 but remember, whatever time point(s) you use you should have a really good reason for doing so. Now, just as long as you've controlled your data collection/athlete performance as much as you possibly can this method will stand you in good stead. Return post-training (or whenever), repeat the test and then you'll have an idea of whether the athlete's RFD has improved or not. By the way, you could apply this same approach to the squat jump, where the athlete starts the jump from a squat position, performing a concentric-only action. Before you apply this method to any task though, make sure you have a bullet proof rationale for why you want to study whatever particular time point you choose. To remove the effect of changing body weight you could normalise it relative to the athlete's body mass by simply dividing it by this (in kg). If the athlete from above is 87 kg, then their relative RFD over 100 ms would be just over 195 N/kg/s. 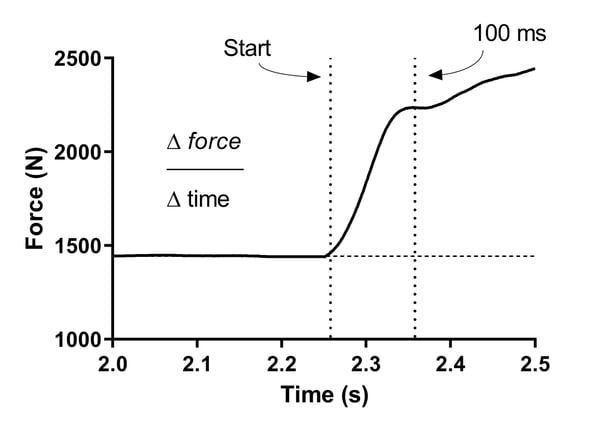 Figure 3. Calculating RFD over the first 100 ms of an IMTP force-time curve.

So, where's the problem? This is where we need to get our pedantic hat on because there are two really important things that anyone interested in RFD needs to consider:

The first thing is more a philosophical consideration. A dull one perhaps, but one that you'll need to be able to answer if RFD is going to be useful. And remember, regardless of how in-vogue a metric may be, you should only ever use metrics that are going to help you. Otherwise, what's the point? The big question then: what does your new-found RFD knowledge give you, what does an RFD100ms of 17,000 N/s actually mean?

This can be a tricky one to answer because while some research shows relationships between RFD and some key performance indicators, RFD has been calculated in sooo many different ways from data that has sometimes been obtained under less than rigorous conditions. This isn't a criticism of those who have studied/used this metric, more an observation. An important one too. Regardless of your role, if you're collecting data you need to join the 'method police', do everything you possibly can to maximise data quality. I'll dig into this a little bit more in the second point. However, briefly, unlike impulse, RFD doesn't directly underpin any mechanical or performance quantity. What does that mean? Let's consider the second point before I'll take you through the potential of alternative, but really similar metrics like impulse

The second thing is, how has data in the literature being obtained? Strength and conditioning social media is often quick to put some studies up on pedestals or shame their authors. While it's good to critically evaluate research, I think we could be a lot kinder about it. Research can be a massive pain in the arse. Fun, but a massive pain nonetheless. It takes a lot of time, energy and know-how so please bear this in mind before you take to you virtual pedestal or flame thrower.

I bring this up because an awful lot of the work that has considered RFD has calculated this metric by dividing the change in force by the change in time on a sample-by-sample basis: numerical differentiation. If you've recorded your data were recorded at 1000 Hz, that would be 1000 data samples per second. What's the problem with that? Check out Figure 4. Whenever we differentiate data we add signal noise. And this is a problem because there is a very real possibility that some of the RFD data that have been presented in the literature have been signal noise. I'm going to delve into that in a bit more detail in part 2 of this article. For now though, consider Figure 3 and ask yourself whether you'd be confident sifting out the signal noise to get to the real RFD. And be honest. 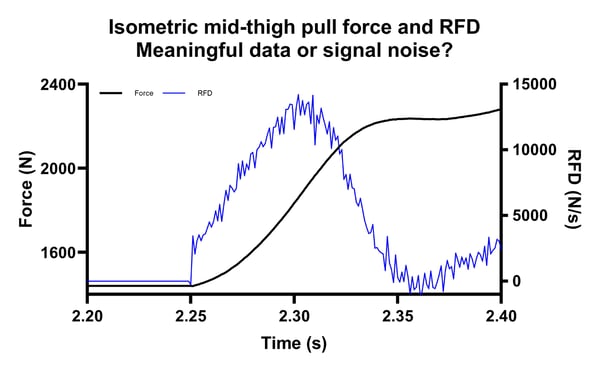 I think that this is probably enough for part 1 of this two-part series of articles on RFD. Hopefully I've been able to shed a bit of light onto this metric. However, before you jump on the love or hate RFD bandwagon, please carefully consider the two points I raised above. Remember too that so far we haven't considered the stretch-shorten cycle (SSC) and believe me, considering RFD in the countermovement jump gets messy quickly. Hopefully however I'll be able to help you navigate that in the second article.

As always, please feel free to ask me questions at Jason@HawkinDynamics.com

Using the shape and characteristics of the countermovement jump (CMJ) to determine strategy.