10 Flooring Surfaces: Factors that affect the quality of your force data

This might be getting old now, but responsibility is one of the key words with this kind of thing: if you want to maximize the quality and utility of your force data then you really must take responsibility for it.

We’ve discussed the importance of this with regards to the metrics you choose to ‘tell your athlete’s story’ in past blog posts (and we will be diving more deeply into other aspects of this). We’ve also discussed some of the processing elements that can affect the quality of your data. However, in this article I want to really take us back to basics and consider perhaps the most obvious and so often overlooked elements: the surface you put your force plates on.

Drake and I want to walk you through why this is so important before we go on to explain how the ground we put our force plates on can affect how we identify take-off, which, of course, is pretty important if we’re interested in studying metrics like jump height, phase duration, and modified RSI.

So, it should be obvious that one of the first things we have to do with our force plates is set them up. And, of course, these means finding somewhere to physically place them on. The problem is however that the floor surfaces force plate users have access to will vary on an coach-by-coach, and perhaps day-by-day basis.

Now, I just mentioned Drake and for those of you who don’t know him, let me take this opportunity to introduce him. Drake Berberet is not only a really nice fella, but he’s also super-bright and an integral part of the Hawkin Dynamics family. See the cool content that pops up on your social media feeds? That’s Drake. And he’s a coach with access to a lot of the different surfaces many of you will be familiar with so he went off and collected a ton of countermovement jump (CMJ) force data using his Hawkin Dynamics system.

A more detailed explanation of the method and images of the testing surfaces can be found at the end of this article.

To try and illustrate the effect that floor surface can have on CMJ force plate data, we've focused on the following metrics:

So, what did we find? Well, check out Table 1, which shows us that yes, perhaps unsurprisingly, the surface you set your force plates on will affect your data. Yes, it might be obvious, but something being obvious doesn’t help you when you’re trying to maximize the quality of your force plate data.

Table 1. The effect that floor surface had on mean and standard deviation (SD) quiet standing and middle flight phase force and the take-off thresholds.

Now, Drake collected these data over two days, so I think it’s reasonable to assume that he didn’t lose the weight that would be necessary to explain the differences shown during the pre-jump quiet standing. Let’s take concrete as our ‘gold standard’ surface here. Look at how grass and foam affect the force data… wow! This is a big deal, differences of up to 30%.

You could be forgiven then for formulating the following actions based of this quick perusal of Table 1: don’t put my force plates on foam or grass, and I think that would be reasonable. However, my inner-nerd implores you to keep on scanning from the left to right of the table.

Look at the monstrous (yeah, that’s a well known statistics term) flight phase standard deviations. More importantly, look at the effect they have on the take-off threshold: the point we identify to calculate metrics like jump height, phase duration, and RSImod.

‘So what?’ you might be thinking. Well, we need to dig out that whole taking responsibility thing again (sorry!). This is because depending on the force plate system you’re working with, the effect that the ground surface has on the take-off threshold could make a complete mockery of your force plate derived jump metrics.

Don’t despair though. If you’re using our Hawkin Dynamics force plate system then well done you, you made a very good choice. And yes, of course we’d say this but let me back up what perhaps seems like a bold, maybe unfair, claim.

So, the reason we consider the mean and SD flight force is because this enables our software to adapt the take-off threshold according to the circumstances the user finds themselves in. This means that if while if during one session we’d recorded our data on concrete then our take-off would be identified as the first force value less than 20.8 N. If we found ourselves on field turf the following week, we’ll see that our software is able to adapt to this because it will identify take-off as the first force under 91.3 N.

This is really important and, once again, while it’s why we at Hawkin Dynamics will always do our best to help you get the most accurate and useful data possible, it should serve as another reminder: take responsibility for the quality of your data. Please trust us when we say that it’s worth every ounce of time and energy you put into this.

Of course, many of you could be using different systems. If that's the case, I would strongly urge you to ask the company how they identify keep points like the start, phase transitions, and the take-off. If they won't tell you they've probably got something to hide and that really isn't a good thing.

One of the ways you can jump on multiple surfaces and keep track of which surface you are jumping on is by using the "Tag" feature that is built into our Hawkin Dynamics software. Here you can watch a short video on how to use this feature. An example tag you could use for this is "Weight Room", "Basketball Court", etc. You can also create a tag for the time of day. For example, "AM Jump" vs. "PM Jump".

Here's the testing protocol that Drake used to collect the data shown in Table 1...

Testing was completed back to back day, at the same time each day. No exercise was performed between days and diet remained consistent each day. 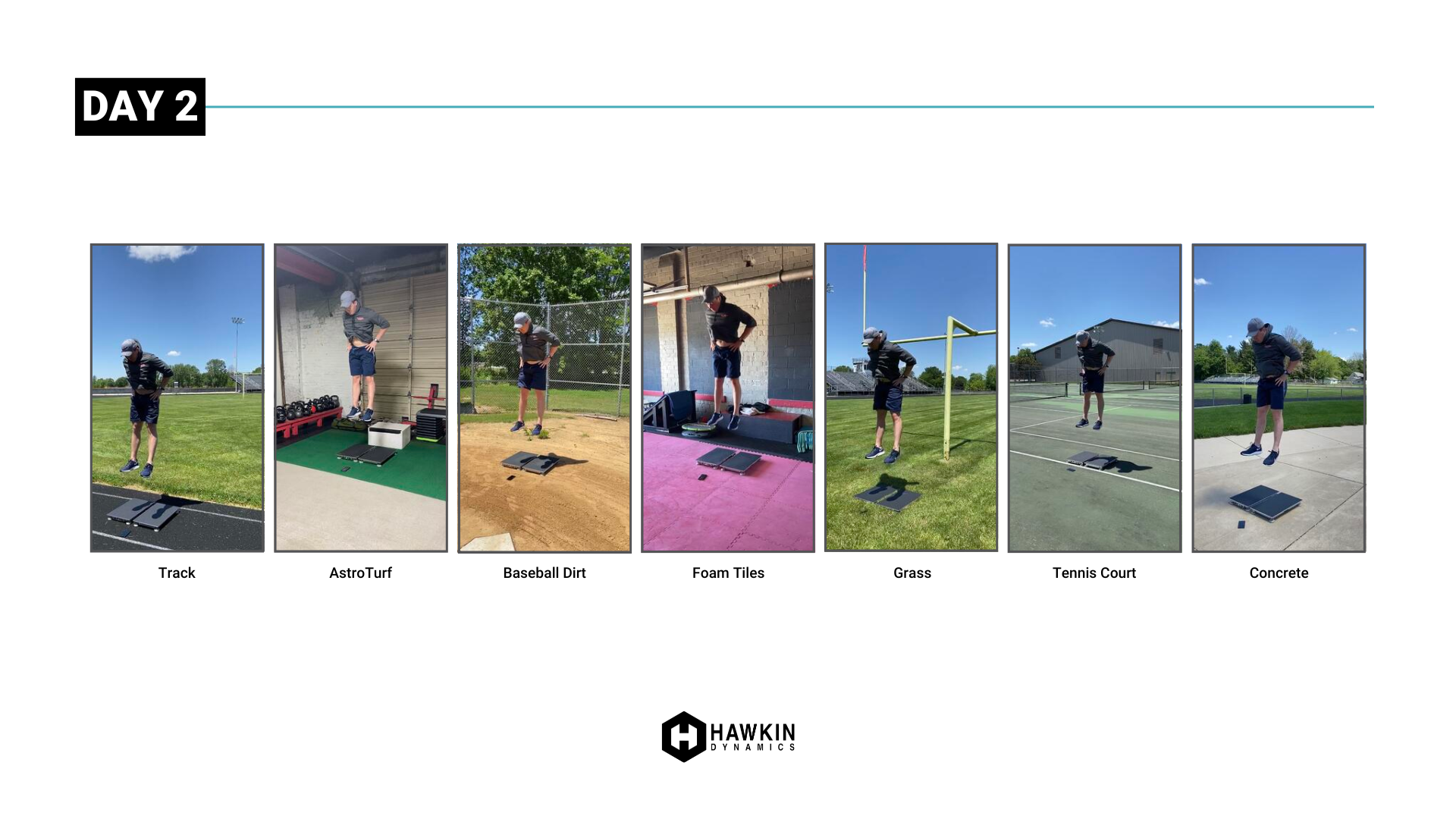 *Drake is the VP of Performance & Brand at Hawkin Dynamics

This article outlines two of the key factors that can influence data quality from repeated jumps and noisy quiet phase. Key phases of the...