As promised, this is the second part of a series intended to provide a gentle introduction to using force plates to inform your day-to-day practice.

First, I think it bears repeating that you do not absolutely need a force plate to maximise your athletes’ performance. Additionally, if you haven’t read my first article you can find it here.

However, by providing you with a clearer understanding of what the force plate can provide I hope to enable a more informed decision.

The briefest of gentle refreshers…

We now know that whenever you send that signal to your muscles to move during ground-based tasks the change in force is recorded by the force plate. 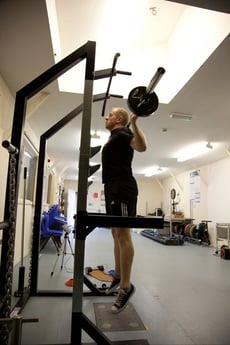 Also, remember that the driver for human movement is impulse, force (how hard you push against an object) multiplied by time (how long your push against it for).

And how can this help you?

I think that the easiest way to demonstrate how the force plate can help inform your day-to-day practice is to work our way through a typical neuromuscular assessment scenario and there’s no simpler test to start with than the vertical jump. We’ll begin with the countermovement vertical jump (CMJ).

In addition to probably been the most popular force plate friendly test (and probably the most misused and abused) we’ll use it as a simple model to help demonstrate how we apply force to perform fairly simple tasks.

With a bit of luck, I’m hoping that this article will help clear the somewhat muddy waters that vertical jump force plate testing often bathes in.

This is a pretty appropriate, sensible even, question to start with, and as mentioned in the last section it’s because it provides a fairly simple model that we can use to demonstrate how we can apply force over time to move in a particular way.

Additionally, if you’re feeling frisky you might consider adding load (via a barbell, hex bar or weighted vest) to assess your athlete’s capacity to overcome additional mass (though this is a discussion for another day).

So, what drives CMJ performance? 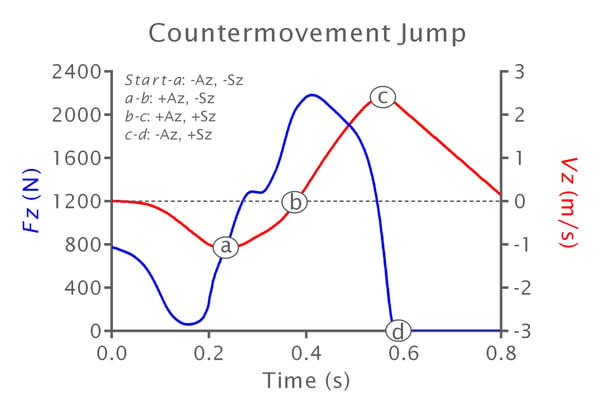 Now, this is a slightly trickier question to address, but one that I remain (perhaps unnaturally) enthusiastic about wanting to answer. So here we go…

Remember that in the first article I explained that impulse (force [how hard you push something] multiplied by time [how long you push it for]) is proportional to a change in velocity (it’s slightly more complicated than this but you get the gist).

A change in velocity over time is acceleration (remember also that we can create negative [travelling in the same direction as gravity – downward] and positive [fighting against gravity – to slow downward movement and cause upward movement] acceleration.

So, to move we have to push against the mass we want to move (during vertical jumping that’s us) over time.

This is the really cool part though because I can apply the same impulse, and thus jump to the same height, using different strategies...

So, on a good day my mass is about 87 kg. That means that if I want to jump 55 cm I will have to apply an impulse during the propulsion phase (Figure 1, b-d) of my jump performance of just over 287 newton seconds (Ns).

If we take our impulse and divide it by my body mass (87 kg) we can calculate my take-off velocity (how quickly I’ll leave the ground – because of the relationship between impulse and velocity). In this case, it will be 3.3 metres per second (m/s). With this in mind, we can start modelling my jump performance.

For example, if an impulse of 287 Ns will propel me 55 cm we can figure out the impact of my impulse capacity reducing as well as how much more impulse I’d have to apply if I wanted to jump higher and use this information to develop more effective training programs.

Recently, Morin et al. (2019) provided a detailed yet relatively simple explanation of why jump height may not be the best metric to quantify lower-body power with and the way in which the impulse that underpins jump performance is achieved can really help drive this point home. 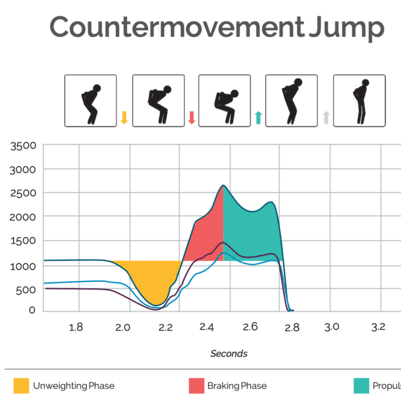 How can you use this information?

By now you might asking ‘so, what’s your point?’, and that’s fair enough.

However, what the above example shows us is that if were to translate our ability to apply force over time from these three examples to a sporting scenario, there is a very good chance that while one of them could lead to the success in an element of sports performance (hint: it's the 1,435 N over 200 ms one), the other would probably see us getting knocked on our backside (574 N over 500 ms).

In layperson’s terms, the majority of sport performances will stand a greater chance of success if our athletes are able to safely apply large forces over short time periods. Of course, there is a time and place for applying smaller forces over longer time periods but team/pitch based sports aren’t normally it.

After all, if you need to accelerate your mass sufficiently to avoid being nailed by the opposition player who’s looming over you, would you want to have the low force-long time capacity or the high force-short time capacity in your locker?

Okay, so I have to make a few things clear here. First, and perhaps the most important, I cannot, never have been able to, and no doubt will never be able to jump 55 cm. This middle-aged, white man really can’t jump.

Second, while the above scenarios would result in me jumping the same height of 55 cm, this is only one part of the puzzle, a puzzle that often becomes even murkier because of a lack of understanding of the biomechanics that underpin movement. There are many other things that we can and perhaps should consider (depending on our knowledge base). And again, it’s time to be completely honest with you, these can’t all be measured with a force plate.

However, impulse really is the driver of human movement and this, and other metrics that can be obtained from the force plate, can help us gain a far greater understanding of our athletes and their movement strategies. The next few articles will elaborate by discussing some of these key metrics so that we can get to the bottom of how jump strategy can influence how we apply impulse.

So what exactly is a force plate?

Force plates are tools used for the measurement of ground reaction forces during walking, jumping, or any other type of movement. Force plates use a...