So, you've heard about force plates... A Gentle Introduction to Using Force Plates

So, you've heard about force plates? Maybe you've seen the buzz on social media? Perhaps you know people who use them? Either way, they've piqued your interest and you want to know more about them. First things first, do you absolutely need a force plate system? The simple (and honest) answer is 'no'! However, can they help inform your day-to-day practice? Most certainly! And it might surprise you to learn how simple they can be to use and the kind of information they can give you.

With this in mind, let me take you through some of the basics to give you a better understanding about whether or not you should invest your hard earned cash, and what you could get out of having them.

So, what are 'force plates'?

If you stand still on a force plate it will record your weight (the product of the stuff you're made of [muscle, bone, fat etc.] and the acceleration of gravity (just like a bathroom scale). Just to stand up straight we have to use our stabilizing muscles to resist the pull of gravity towards the ground. Knowing this really helps us use force data to measure different elements of human performance.

Now, imagine you're standing on your bathroom scales, your weight will be fairly stable. However, if you squat down and then stand up again you'll notice that your weight changes. When you travel in the same direction as gravity your weight will decrease; when you fight against gravity to either slow your squat down or stand up your weight will increase. The big question to ask yourself here is 'why'?

In the above scenario, our force plates are being used as a set of bathroom scales. Why is this cool? Well because force plates will record your weight a) very accurately, and b) one thousand times (typically) a second. This high-frequency recording is substantially more sensitive than a traditional scale.

So, if we stand still on the force plate it will give us our weight, and if we move it will tell us how much our weight changes.

Remember that our weight is essentially our 'standing still' force, so when our weight changes this is the force we're applying to the ground changing. Force changes when we contract our muscles to move and this gives us the force-time curve which is the basis of force plate assessment.

Consider our earlier squat scenario... the force plate enables us to see how much force we have to apply to control our movement during the squat in addition to telling us how long it takes us to apply these forces. 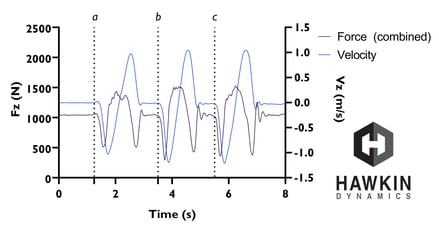 Whenever we move we have 'velocity'. This is the same as 'speed' and it tells us how fast we're moving in a particular direction (e.g. up or down). We can also study this velocity to figure out whether we're accelerating or not (remember Newton's F = ma - a force must be applied to accelerate a mass - the athlete). This is incredibly cool and useful because, all technique issues aside, most sports rely on the athlete's ability to accelerate (ideally faster than their opposition).

We know what a force plate is... so what?

So, we now know that a force plate records both the force that we apply to the ground when we contract our muscles and how long we apply any force for. Multiplying force (how hard we push or pull something) by time (how long we apply this force for) gives 'impulse' and this is the driver of all movement.

Impulse is directly proportional to the change in an athlete's velocity, whether they're speeding up or down (also known as 'accelerating'). 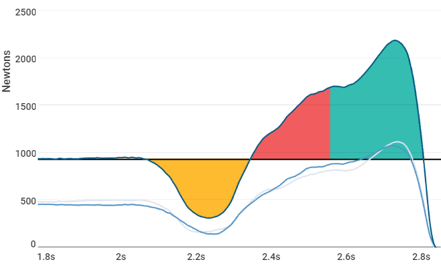 This means that by having a force plate to record impulse we can figure out how fast and in what direction an athlete moves. We're normally interested in how much force is applied, how long it's applied for, and how quickly the athlete moves. When we know this we can figure out our athlete's neuromuscular capacity and we can use this to see where they are in terms of their training, and we can also gauge how competition, injury and training affect this.

**Note: Many impulse's exist along the force-time curve showed above. Unweighting impulse is the yellow area. Braking impulse is the red area. Propulsive impulse is green area. The combination of red + green = the total positive impulse, whereas the yellow is the negative impulse. The magnitude of the green area (also known as the push-off phase) is directly correlated to the velocity at which the athlete will leave the force plate. That velocity is directly proportional to Jump Height.