The Squat Jump test is a useful test for measuring concentric-only force application. Think of it this way – a power forward in Basketball will use an eccentric-concentric combination to jump for a rebound under the basket, while an offensive lineman will largely only use concentric contractions to propel himself forward from a “set” position. When the eccentric phase of a movement is removed, how well can an athlete perform? Often, the squat jump test is used in conjunction with the countermovement test in order to answer this question.

Like the CMJ test, a Squat Jump (SJ) consists of the same performance metric (jump height) and descriptors indicative of how the athlete achieved the result, although it is often much simpler in terms of the distinct phases involved. Since there is only a concentric phase, we don’t have the opportunity to examine the relationship between the eccentric and concentric phases—nonetheless it is still useful for measuring how much propulsive force an athlete can produce. Additionally, the SJ test can oftentimes be more difficult for athletes to master. A CMJ comes naturally to most athletes, but an SJ, in contrast, can be difficult on the first try. Most often, we see athletes adding a countermovement before the jump, rather than going right into the propulsive phase – this should cause the test to fail as it is not an actual squat jump. 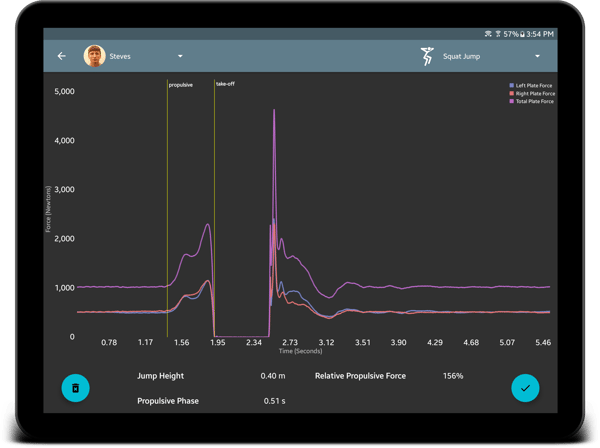 Phases of the SJ